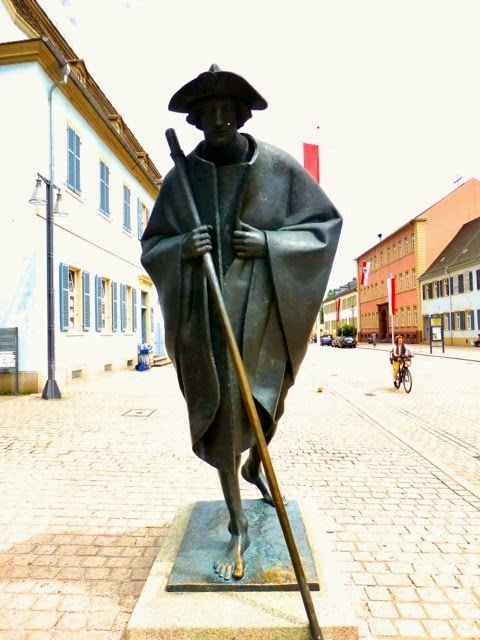 Statue of a Pilgrim in Speyer, Germany

People have been making the pilgrimage to Santiago for over 1000 years. It was especially popular during the Middle Ages when pilgrims would walk through the front door of their homes from all over Europe and make their way on foot to Santiago, Spain. At that time, pilgrims often had to deal with bandits and wolves as well as figure out where to eat and sleep. Alberques (hostels) sprung up along the routes to support these long distance walkers.
The reason why people made such an arduous journey was often to do penance for sins. Today, the reasons are as much for adventure as spiritual. Many shrines can be found along the way, including the Iron Cross where pilgrims leave a stone from home as a symbol of leaving their burdens at the foot of the cross of Christ. Pilgrims travelled to Santiago because the bones of Saint James the Apostle are allegedly buried there. The scallop shell has become the symbol of the pilgrimage and every pilgrim wears one on her backpack. Directional signs often use the scallop shell to show the way. And scallop shells can be found in churches all over Europe.
In the Middle Ages the Knights Templar protected the pilgrims along the route. There is still a preserved Templar Castle along the Camino in Ponferrada.
When Saint James Day (July 25) falls on a Sunday it is a Holy Year and many more pilgrims make the effort to reach Santiago. 2010 was such a year and over 250,000 pilgrims reached Santiago. The next Holy year is 2021.
Pilgrims obtain a passport (credencial) at the beginning of their pilgrimage. This is stamped wherever they stay as proof of the journey. In Santiago pilgrims receive the compostela (certificate of completion). However, just walking the last 100 km will suffice to receive this certificate. Supposedly, the certificate will give you forgiveness for your sins.

Posted by Chris and Jeff at 4:47 PM No comments: 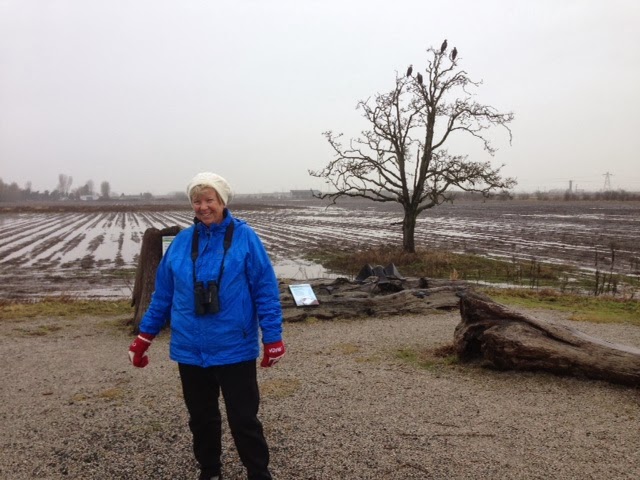 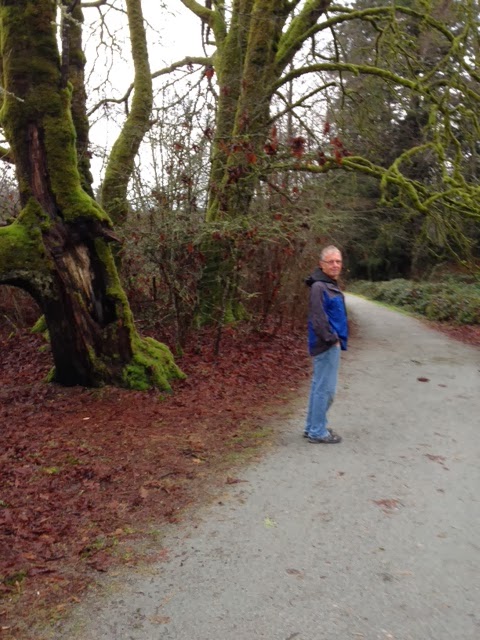 January 10, 2014 Jeff (and I) in Tynehead Park this morning. Dodging rainstorms. 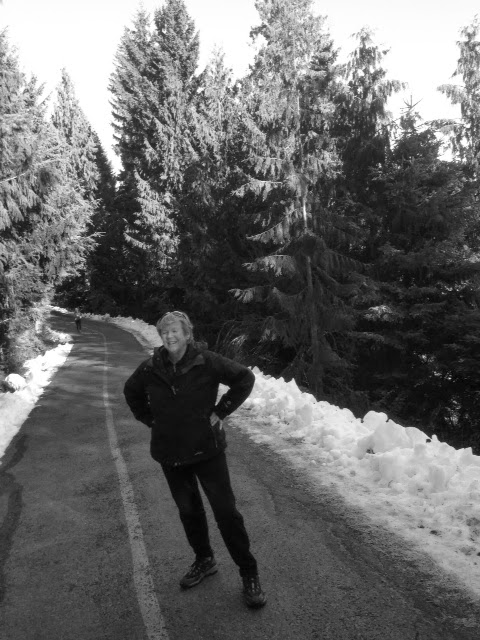 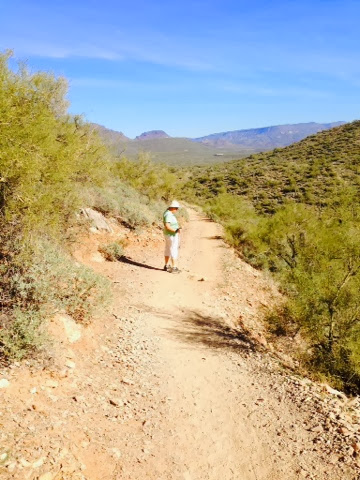 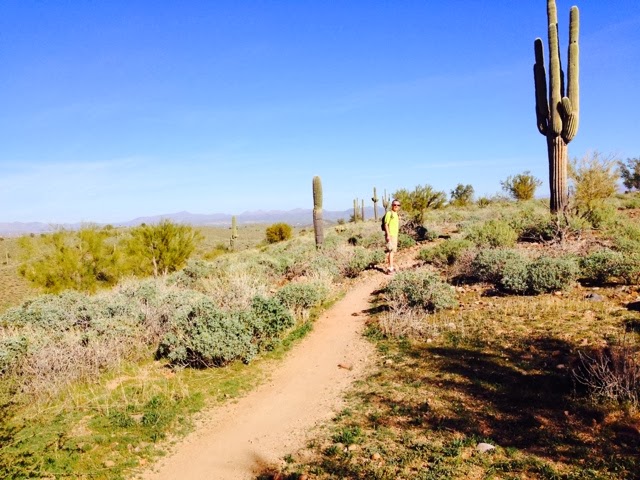 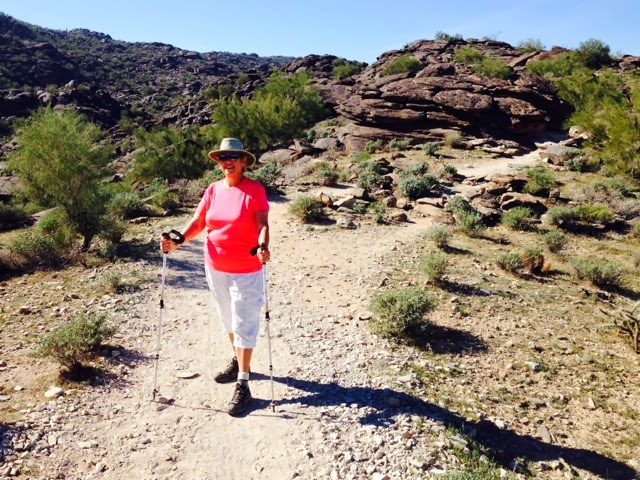 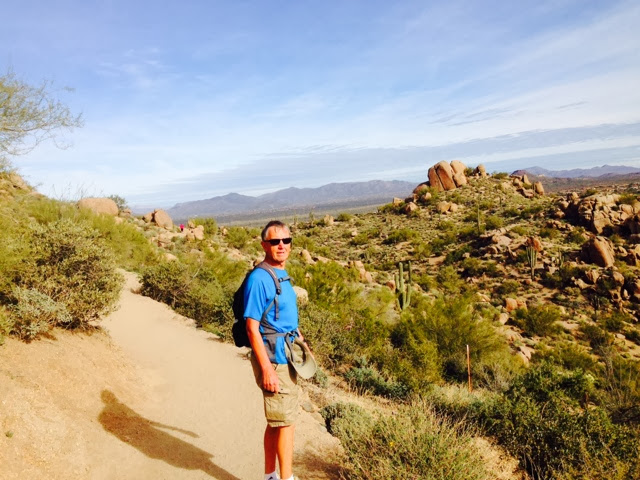 Pinnacle Peak today. January 30, 2014. Like a garden up there. It was a bit hard. Reminded me of the Grouse Grind in sections. Nice coolish day for it!
Posted by Chris and Jeff at 7:16 PM 2 comments:

The Confraternity of St. James: www.csj.org.uk

Posted by Chris and Jeff at 2:22 PM No comments:

Route and Map of the French Camino 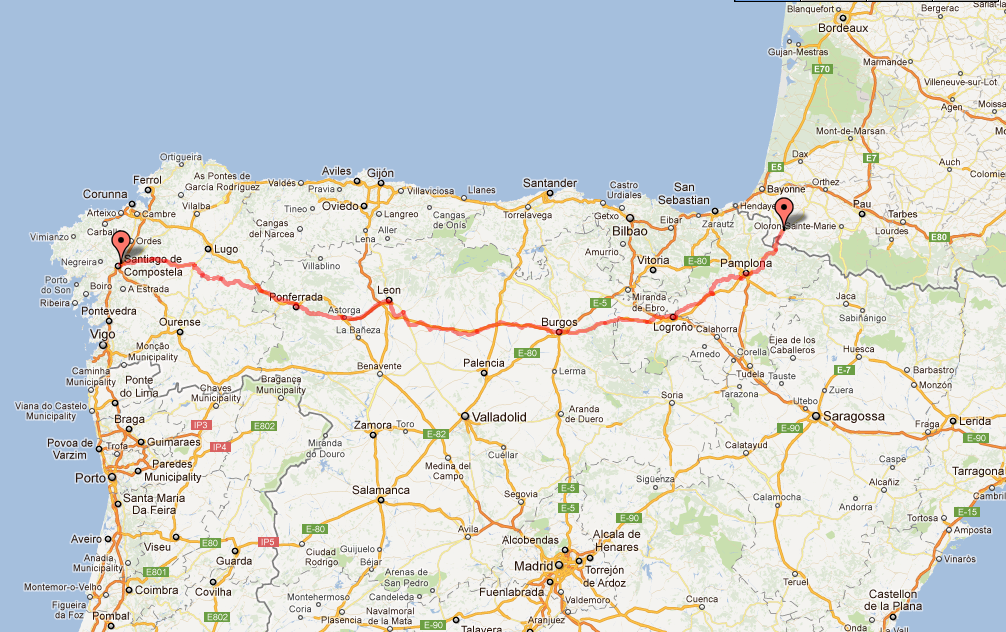 When we begin our pilgrimage on May 5 we will start from the small French village of St. Jean Pied de Port, which is nestled in the French foothills of the Pyrenees. Then, over the next six weeks we plan to make our way west at the rate of 20 to 30 km a day until we reach Santiago de Compostela June 14. We plan on spending an extra night at major cities like Pamplona and Leon. Whereas most pilgrims stay overnight at albergues, generously situated along the route, we plan to stay in small inns with ensuites. Our luggage will be sent on each day to the next inn. We need carry only a light day pack. We will be finding our own way with the help of arrows and scallops that are marked on trees, poles and rocks along the whole route. By the way, there are other pilgrimage routes all over Spain also leading to Santiago. The French Camino is merely the most well known and supported. The route is mountainous at the beginning and at the end. In the middle there will be a week of walking the meseta, which is a high, treeless plateau. This all sounds rather daunting. But as Brierley says in his book, "Any reasonably fit person can accomplish this journey without undue stress"(pg. 20). Buen Camino!
Posted by Chris and Jeff at 4:13 PM 3 comments:

Books on the Camino 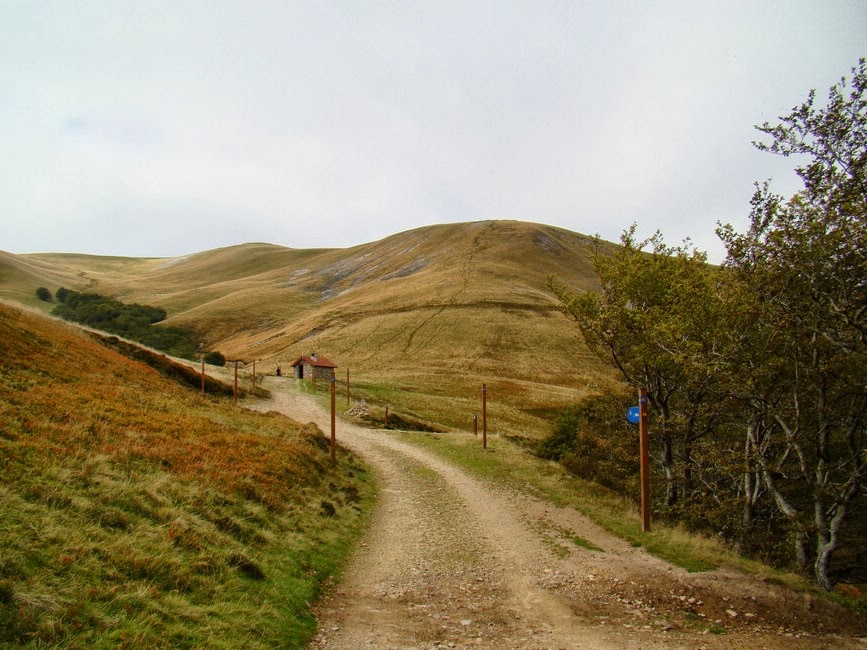 To the Field of Stars - Kevin A. Codd

I'm Off Then - Hape Kerkeling

What the Psychic Told the Pilgrim - Jane Christmas

Introduction to Walking the Road to Santiago

What? You are planning to walk 800 KM? Are you nuts?? What gave you this idea?? A good
question, indeed.

Jeff and I have been walking on a regular basis since our children were in high school. We organized an elaborate dishwashing schedule for them after our family dinner. While they cleaned up we walked around the block, often in the dark. That was the start.

Since then, walking has become our sport. We have found the loveliest places to walk, on our holidays and also near home. We are lucky to live near Tynehead Park where we indulge in walking almost everyday.

Several years ago we read Jane Christmas' What the Psychic Told the Pilgrim and much later watched the movie, The Way. This inspired us to start thinking about someday walking that fabled route in Northern Spain.

Jeff is having a milestone birthday this March and what a great way to celebrate this, with a long distance walk. Joining us are Bert and Diane plus Arlene and Joyce. We are looking forward to fun times together!